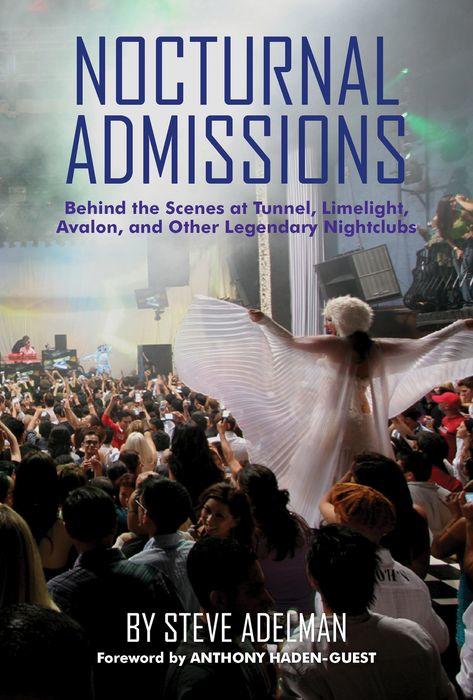 Nocturnal Admissions takes a timely, non-conventional look at one of Pop Culture’s most outwardly glamorous, yet misunderstood industries, bringing the reader backstage to experience nightlife as few have seen it. Wearing the multiple hats of ringmaster, entrepreneur, guidance counselor, million-dollar deal maker and dance music pioneer, Steve reveals that the key to survival lies not with being the ruthless conqueror of this winner-take-all ‘World at Night’, but the ability to keep it all in perspective, apply lessons learned and never loose one’s sense of humor along the way.

“As a nocturnal power broker, Steve Adelman knows the ins and outs of classic NYC nightlife, and he also knows his way around the art of telling about it all. His book is like a comp bottle of champagne served in a VIP room.”

“Steve Adelman knows nightlife. His customers might not remember much, but Adelman does. In Nocturnal Admissions, he takes us on a youthful adventure into the depths of dancing and drugging and hooking up—without ever losing his sense of wonder.”

“For three decades Adelman has been a nightlife innovator at the highest level. Whether it be mega-clubs in NYC or dance clubs in Boston and Hollywood, he has set the trend for others to follow. Nocturnal Admissions goes behind the scenes into his world and feels like a funhouse where you can’t help but anticipate what’s around the corner.”

A world “unbound by the restrictions . . . of daytime responsibilities” comes to exuberant life in Adelman’s debut, a chronicling of his decades-long tenure in the nightclub scene. Determined to one day recreate his own version of “Ricky’s Tropicana Club” in I Love Lucy, Adelman left his childhood home in Michigan’s suburbs for N.Y.C. in the mid-1980s. By the early ’90s, he was the 30-something director of five of Manhattan’s largest nightclubs, including the legendary Roxy and the Limelight; in the next 10 years, he’d open clubs in Boston, Hollywood, and Singapore. In stories that pulsate like an EDM track, Adelman gives readers VIP access to that glitzy bygone era’s swirling parties littered with drugs and alcohol. Along the way, he details the “controlled process” of maniacal publicity stunts—fueled by the fascinating symbiotic relationship of celebrities and club promoters who manipulated the press—and offers an entertaining who’s who of club-going stars, from RuPaul to a “recently divorced” Donald Trump, who’d “turn up with a young model type, then call it in himself to the tabloids.” While the New York club scene crumbled under city crackdowns throughout the aughts, Adelman concludes on an optimistic note, claiming that a new golden age of nightlife—“the perfect storm of pent-up demand meeting a changing society”—is approaching. Partygoers will be dazzled.

“Electronic music in America in the early 2000s went through a renaissance period, with parties and rave events selling out every single weekend. People would come to these club shows in droves, hinting at a sign that there was an eventual EDM boom looming about a decade later. During this time, I was performing often at renowned venue Avalon in both Los Angeles and Boston, run by industry legend Steve Adelman. The production, energy, and overall vibe when I played there was, and still is to this day, absolutely unmatched. Nocturnal Admissions tells the story of how Avalon became a pioneering force in the music landscape, and consistently helped foster and maintain the local electronic music community’s passion for the genre — a highly impressive feat that I’m immensely grateful for even now.”

“The world after dark I’ve photographed for over four decades is a place unique to our culture. One where its inhabitants are free to be themselves, without restriction, societal standing or sexual orientation. Nocturnal Admissions captures the humor, commonality and lessons learned from the crazy, fun, glamorous, at times outrageous, ever-changing and essential gathering place we call nightlife.”

“While reading Nocturnal Admissions, I laughed, I cried, but mostly I hoped…that someday Steve would get a real job.”

“Nocturnal Admissions chronicles a great time to be alive. In the late ’90s and early 2000s, American nightlife got a second wind and in the thick of it was Steve Adelman with clubs in New York, Boston, and Los Angeles. Playing for Steve at the Avalon clubs in Boston and L.A. was always one of the highlights on a stateside tour for me, with sold-out nights and lines around the block. Steve’s clubs set the standard for the events that take place now.”

“Electronic dance music culture has blossomed and transformed over the years, but its mythos runs through Steve and his seminal contributions to nightlife. Even in the aftermath of 9/11 and the throes of a devastating pandemic, he has proven that the bonds cultivated in clubs are vital for human nature. If the past can speak to the future, Adelman’s work is the cell tower. And Nocturnal Admissions is the carrier.”

“Playing the dark Avalon nightclub in Los Angeles was like evoking a mysterious live energy inside a classic architectural masterpiece. Nocturnal Admissions goes behind the scenes, documenting everything that goes into running venues like Avalon, and how the environments Adelman created brought out the best of a DJ’s creativity while performing to a crowd desperately waiting on every mix. When I played clubs like Avalon, I felt a responsibility to deliver.”

“Nocturnal Admissions is a can’t-put-it-down book exploring the world that I’ve lived and breathed all my adult life, told in fascinating style through the eyes of one of the scene’s most important players.”

“An insightful love letter to a magical era in nightclubbing history. If you were lucky enough to be there, you will bubble over with nostalgia, and if you weren’t, you will be inspired to start on your own nightlife journey.”

“Playing the dark Avalon nightclub in Los Angeles was like evoking a mysterious live energy inside a classic architectural masterpiece. Nocturnal Admissions goes behind the scenes, documenting everything that goes into running venues like Avalon, and how the environments Adelman created brought out the best of a DJ’s creativity while performing to a crowd desperately waiting on every mix. When I played clubs like Avalon, I felt a responsibility to deliver.”

“As a photographer for the likes of Details, Max, Photo, and Stern in New York City during the ’80s and ’90s, I found the nightclubs and underground scene a fascinating place to capture so many unguarded and honest portraits of both celebrities and unknowns, unchained from the daily grind. Steve Adelman’s sanity and sharp wit during those wild times enabled him to thrive in the surrounding chaos. In Nocturnal Admissions, he brings this diverse cast of nightlife characters vividly back to life for all to enjoy with warmth and humour.”

“Steve Adelman is a master at creating spectacular nocturnal playgrounds, many of which I was fortunate to be a part of. However, In Nocturnal Admissions, it becomes clear that his talent for creating captivating environments extends beyond the world of nightlife and into his wonderful gift of storytelling. Steve is a keen observer of culture and deftly injects his personal adventures with insightful political, societal and historical context. In Nocturnal Admissions, Steve brilliantly captures one of the most exciting periods in contemporary music history in a way that is personal, humorous and thoroughly engaging.”

Past Praise for Steve Adelman and His Nightclubs

“Adelman sets the scene, from Old World clubs to hipsters.”

“’Excitement’ is a word to describe Adelman’s clubs.”

“Adelman creates a sense of dazzle and delight.”

“The game is played at different levels and Adelman is in the big leagues.”